On October 19, 2011, Dr. Fareed Zakaria visited Minneapolis as the guest of BestPrep, a nonprofit organization with which I’m involved that provides students with business and financial literacy skills. At a breakfast meeting and in a presentation, Dr. Zakaria shared his thoughts about the current state of the American media, as well as American politics.

Dr. Zakaria expressed serious concern about the current state of politics in Washington. Rather than there existing any incentives for compromise, instead a Congressperson’s quickest road to fame is to make a virtue out of a refusal to compromise. Furthermore, in the current political climate Dr. Zakaria believes that if a politician starts moving towards the center, he/she risks both losing the flank and potentially not gaining any voters from the middle. Thus there is little incentive for moderation and instead a tendency to take more-extreme positions.

Dr. Zakaria believes our electoral system is broken. In a reference to James Madison’s fear of a “tyranny of the majority,” in which groups too small to win a majority vote will go un-represented, he spoke of a “tyranny of the minority.” Our reliance on primaries to pick candidates has resulted in minority interests being over-represented while majority interests take a back seat. 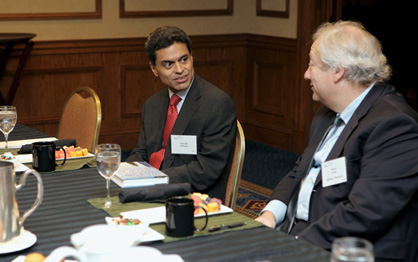 The role of the media

There was a great deal of a discussion about the media. Don Shelby, former WCCO News anchor and respected Minneapolis journalist who served as MC of the BestPrep event, referred to studies from the College of William & Mary and the University of Maryland which found that facts have remarkably little influence in developing peoples’ opinions. Instead of people gathering data in order to formulate a position, they form an opinion and then gather the facts that will confirm it. There was further discussion about the proper way to problem-solve, which is to ask, “What are the data that can disprove our thesis?”

There was also discussion of narrow-casting, in which the media (news media in particular) are less interested in providing both sides of an issue than in promoting a particular opinion. Shelby noted that this change began in 1987, when the Fairness Doctrine was eliminated. (The Fairness Doctrine was a 1949 FCC policy that required those with broadcast licenses to present both sides of important controversial topics in an honest, balanced way. It was rescinded in 1987 and officially taken off the record in 2011. [1])

Dr. Zakaria also pointed out that the media is not a charity—it is a for-profit business. And it needs to sell its product to survive. He recalled that when he was at Newsweek, if he put a foreign affairs topic on the cover, the issue would not sell nearly as well as those featuring diets, fads, or celebrities. In fact, I believe he stated that the four worst-selling issues of his tenure all featured foreign news on their covers. [2]

Dr. Zakaria discussed his concern that our tax system has been catering to special interests—to the point of creating institutionalized corruption. Our Internal Revenue Code, with revenue rulings, numbers 75,000+ pages—whereas, for example, Germany’s code is only 500-some pages. We have a desperate need for simplification so that we can break through the existing ceiling of tax complexity and become a more productive society.

With regard to business, Dr. Zakaria stated that although business is facing some of the lowest demand since the Depression, he also felt that business needs to start finding ways to be part of the solution. And part of that solution may simply be making a commitment to start hiring people.

Dr. Zakaria believes that the American dream is “middle class material satisfaction.” A major concern, shared by many economists and policy makers, is that the large middle class is losing its ability to make a livable income.

Finally, Dr. Zakaria stated that we currently spend four dollars on every elderly person for each dollar we spend on our youth. One way to invest in youth is to invest in education. Dr. Zakaria noted that schooling cannot be a leisure activity. American kids spend fewer days in school compared with those in most other countries. Two aspects of education he especially supports are thinking/problem solving and lifelong learning.

The last 10 years have given Americans an overwhelming sense of uncertainty and lack of security. Some are calling this the “decade of catastrophe,” with events ranging from economic catastrophes to natural disasters to wars. One concern is how this will affect our kids when this attitude becomes the foundation of their long-term world view. Interestingly, however, Dr. Zakaria noted that despite people’s perceptions, the world overall is actually getting better. [3]

Zakaria as an individual

I believe Dr. Zakaria is a realist. I found him to be someone who believes his responsibility as a journalist is to provide both sides of an issue so as to allow the audience to reach an informed decision. One of my long-held ideas was confirmed: the fact that although our world is complicated, many of the solutions involve simplification. Moreover, I found Dr. Zakaria personally inspiring. Although he enjoys world-class fame, he treated us all with respect and expressed interest in our ideas.

Keep your eye on this journalist. I believe he will be a source of information that will help identify solutions to help enhance global cooperation—thus raising the entire world’s standard of living.

BestPrep is a statewide, nonprofit organization with a mission to best prepare Minnesota students with business, career and financial literacy skills through experiences that inspire success in work and life.

[2] The best-selling issue for the revamped magazine—and the second-best seller of the year—was the Oprah cover with the headline CRAZY TALK, which sold 85,000 copies. A cover on the Iranian elections, which didn’t look demonstrably different than the old Newsweek, was the worst seller out of the bunch, with 50,000 copies sold. http://www.observer.com/2009/media/no-sales-bump-yet-redesigned-newsweek

[3] The 2011 State of the Future finds the world is getting richer, healthier, better educated, living longer, and is more peaceful and better connected; yet half the world is potentially unstable. http://www.millennium-project.org/millennium/2011SOF.html