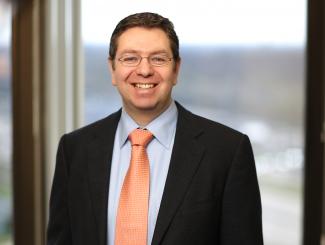 The Presidential Election Cycle and the Seven-Year Itch

With the arrival of 2016, we can look forward to a November presidential election (and the end of more than a year of campaign advertising). A common question that I hear asked is whether there is a relationship between the stock market and presidential election cycle. The simplest answer is…maybe.

This theory makes some intuitive sense. Candidates and parties seeking to be re-elected would do their best to promote economic growth prior to elections. Conversely, newly-elected presidents can do all the rotten things required by the position without yet needing to worry about the polls. While the economic medicine may be unpleasant in the short term, it will work its magic in the long term—just in time for the next election.

Yale Hirsch is believed to have first noted this connection. Writing in the Stock Trader’s Almanac in 2004, Hirsch stated, “Presidential elections every four years have a profound impact on the economy and the stock market. Wars, recessions and bear markets tend to start or occur in the first half of the term and bull markets, in the latter half.”

Below is a graph of stock market performance by each year of a president’s term. The general upward trend, represented by the blue line, is expected, as markets tend to move up over time. 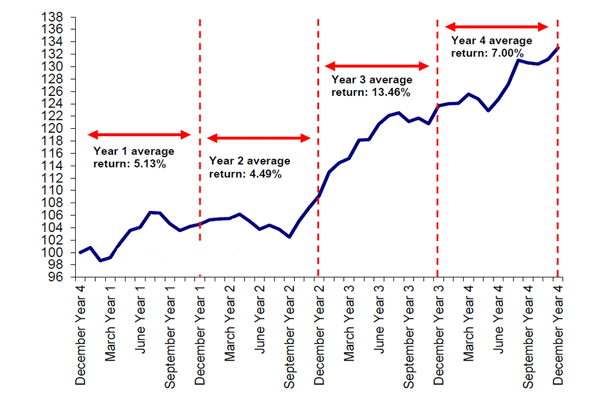 Asset management firm GMO conducted a similar study, but instead of using calendar years, they examined returns from October 1 through April 30 (one month prior to six months following an election). In this sliced data, the average returns since 1932 for the third year of a presidential cycle are 17%. Per Jeremy Grantham, co-founder and chief investment strategist of GMO, the odds of this happening naturally is 1 in 200. Pretty convincing odds.

However, the presidential-cycle theory is in direct contradiction with the random walk hypothesis, which states that market movement is not predictable. In addition, while this theory applies fairly well to the first part of the twentieth century, it seems to have broken down over the last several decades. It certainly wasn’t the case for the latest presidential cycle, during which years one and two outpaced year three no matter how you slice it.

One possible explanation for market performance in 2015 being less than 2013 or 2014, is that perhaps 2015 should not be viewed as the third year of President Obama’s second term, but rather as the seventh year of an eight year election cycle.

Since presidents in their second term do not need to worry about being re-elected, would that change their inclination to support legislative changes to help boost the market?

In a recent paper, Michael Hartnett, of Bank of America Merrill Lynch, notes several events that led to significant market down turns at the end of two-term presidents. These include:

Even Ronald Reagan was affected by the apparent seven-year itch during the “Black Monday” crash of 1987, when markets suffered a 23% loss in one day (although the markets quickly recovered). Below is a graph showing market changes during two-term administrations. 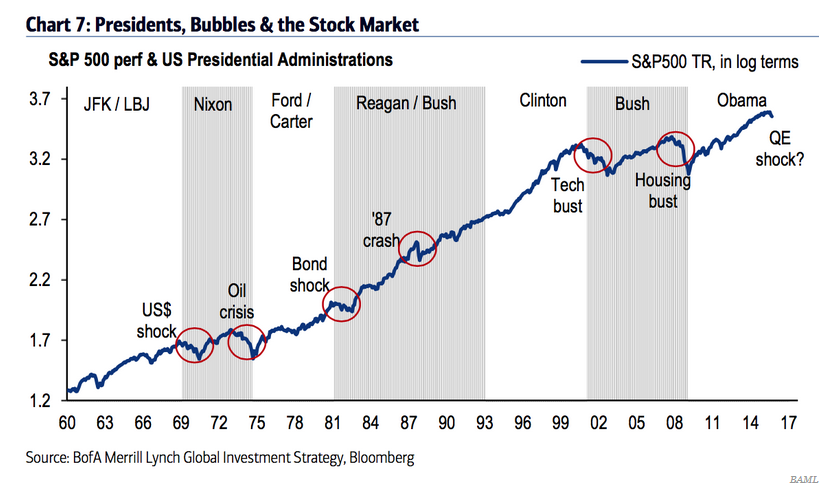 The data begs the question, does the end of a two-term presidential cycle create an opportunity for overvaluations to be corrected? According to Hartnett, it does. He predicts that “2016 should be another tough year for markets, another year of deflationary expansion, and a perilous transition to the promised normalization of higher growth and higher rates.”

While the data and theories presented by Hirsch, Grantham and Hartnett are interesting, they are not a certainty. The relatively small number of presidents, and the even smaller number of two-term presidents, does not provide a robust body of data to examine.

We all wish we could find the secret to unlocking market trends and predicting what they will do in the future, but the reality is, it’s never a sure thing.

So while history does appear to suggest a trend based on presidential terms, I would urge caution in turning the data into any specific investment policy decisions. There is still the possibility that the timing is merely a coincidence.