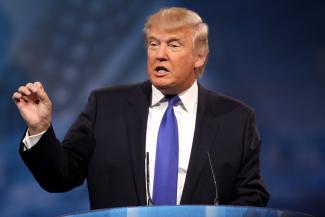 Year-End Market Performance — What happened in the markets as 2016 came to a close?

We are often asked to explain why certain asset prices increase and others decrease. Since the presidential election, these questions have only become more frequent. So, why did prices of stocks go up following the presidential election? The simplest explanation was given by famed investor Howard Marks, who stated that the reason that stocks go up is that there are more buyers than sellers. Likewise, asset prices decrease when there are more sellers than buyers. While this answer may seem flippant, the basic relationship of supply and demand actually does a better job explaining price movement than the reasoning by many journalists who ascribe a myriad of other factors. 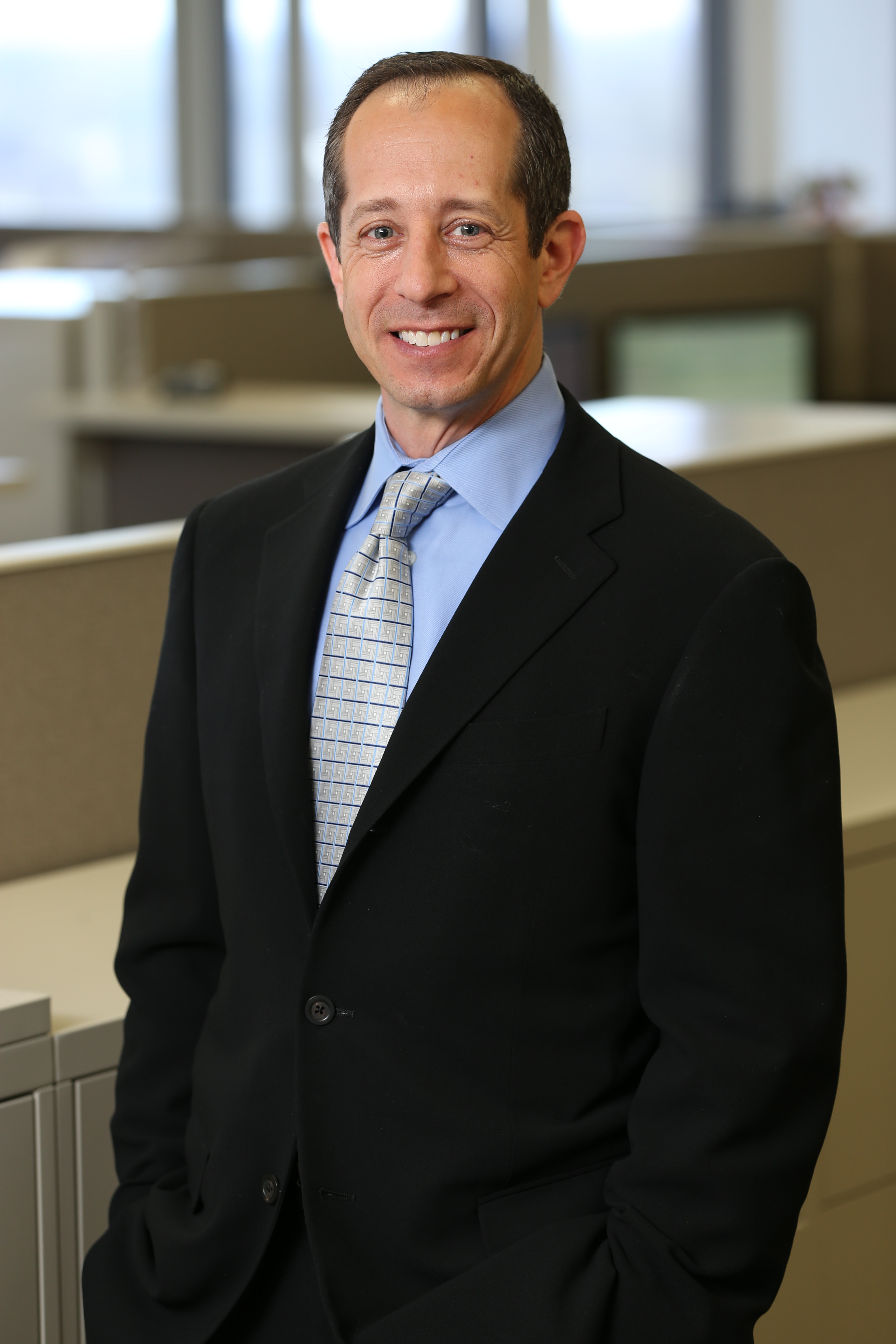 During the course of the election, our firm’s stand was that it would be a mistake to make long-term investment decisions based on the unknown expectation of a single outcome. We can positively say that the general consensus in the financial press at that time – if Trump wins, then the markets will go down – was clearly wrong. So, while we had no idea how the election would turn out, we also had no special insight on how stocks would react after the election. But, react they did, and very strongly. While prior to the election, most assets moved in a somewhat synchronized manner, after the election we’ve seen an incredible divergence of performance. In general, performance has been inversely related to market cap, and overseas markets have fared poorly. For example, in just the past six weeks, small-cap U.S. stocks are up more than 17.5 percent, mid-cap stocks have jumped nearly 12 percent, while the larger-cap S&P 500 index is up over 6 percent. International markets are up just 1.25 percent, based on the EAFE Index, and emerging markets are down 6.5 percent. 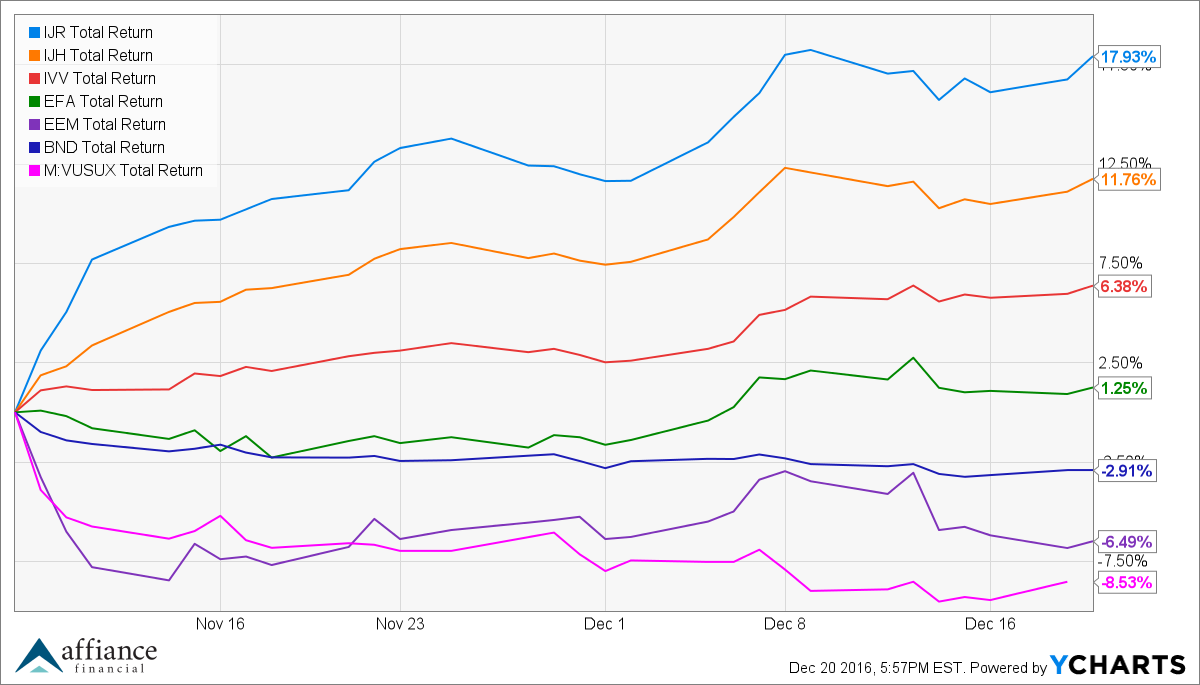 The biggest divergence in expectations has occurred in the bond market. What was one of the best performing assets in the portfolio in the first half of the year, has become one of the worst performers in the second half. Our bond allocation is designed for protection, helping to reduce overall portfolio risk while providing income. In this sense, bonds have done very well all year long. While they helped to reduce risk when the markets swooned in January and February, they have underperformed during the recent stock market rally. After gaining more than 18 percent at mid-year, Treasury bonds have declined by 16 percent from the highs, with half of the decline taking place since the election. After all the ups and downs, they are now flat for the year.

So, what does this mean?

Our skepticism is founded on the size of the economy, the level of debt, and the challenges of running a very big and complicated government. As such, we continue to believe that the long-term returns for stocks is positive, and that over the long term stocks will outperform bonds. We would urge caution before wholly abandoning any currently designed long-term investment strategies in favor of chasing the flavor of the day. This doesn’t mean that we haven’t, or won’t, make changes to our recommended portfolio allocations, but it does mean that the changes won’t be knee jerk reactions.

We have taken a contrarian position on interest rates during the past several years. Today, we continue to be so bold. While inflation expectations may be increasing, due to the anticipated Trump stimulus package, we believe the outcome and rate of change is far from certain. Global forces remain deflationary, with zero or negative interest rates in Europe and Japan. China’s growth has slowed, but stabilized, at lower levels, while the U.S. dollar has peaked at decade highs. A stronger dollar makes foreign goods less expensive, drives foreign investment in long-term U.S. Treasury bonds, and is a headwind to higher oil prices. In short, we believe that there will likely be little real inflation, and that the rise in long-bond rates is probably overdone. Short-dated notes may continue to see rate increases as the Federal Reserve’s more hawkish (and anticipated) federal funds rate increases may dampen expectations of inflation ahead of any real inflationary threat.

As Nobel Prize-winning physicist Neils Bohr was famously quoted as saying, “Prediction is very difficult, especially if it is about the future.” We use the best information we have today about our expectations for future stock prices and interest rates to arrive at our recommended portfolio allocations. A focus on downside risk and long-term (10-year) forward return expectations for asset class performance guides our investment process. While short-term changes can have significant long-term impacts, it is rare. We tend to make small portfolio adjustments to keep us on track to reach our long-term goals without getting whipsawed by daily news and prognostication.

The desire to “do” is strong, while the need to remain prudent is paramount. At times, this can mean being out of step with the market, and does not feel particularly comfortable. We will be revisiting our long-term expectations at year-end and making any updated recommendations shortly after the New Year. Until then – as usual – our best recommendation is to stay the course and continue to try to parse the wheat (what is really taking place in the economy) from the chaff (short-term noise and prognostication).