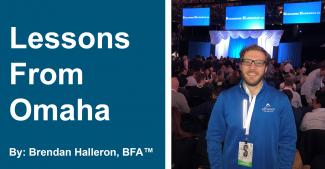 For five years and counting, I have been fortunate enough to attend the Berkshire Hathaway Annual Shareholders Meeting. Known as “The Woodstock of Capitalism,” this annual meeting attracts more than 42,000 people each year and has become more spectacle than summit. Held during the first weekend in May, this meeting turned weekend spectacle provides investors from around the world with an opportunity to meet, network, and gain wisdom from two of the most well-known investors ever: Warren Buffet and Charlie Munger.

While the events of the weekend have grown in grandeur over the years, the format of the Annual Shareholders Meeting has remained consistent. After an opening proprietary video, Buffet provides a brief commentary of the reported first quarter company earnings followed by questions from a panel of journalists, analysts, and members of the audience (shareholders). The questions continue for the next five hours, an impressive feat given the advanced ages of both Buffet (88) and Munger (95).

The questions cover a range of topics including Berkshire’s recent performance, current politics, international economics, investing framework, and life lessons. Oftentimes, questions from the audience are more self-serving than widely applicable. However, there are always a few gems. This year, the most poignant question came from an 11 year old from China. His question was:

“Mr. Buffet, you mentioned that the older you get, the more you understood about human nature. Could you elaborate more about what you’ve learned, and how can the differences of human nature help you make a better investment. I would also like Mr. Munger to comment…”

Buffet, taking time to admit his inevitable cognitive decline, stated, “…I would say this. It’s absolutely true in my view that you can and should understand human behavior better…we learned an enormous amount just from studying the lives of other people.”

Munger added, “I’ll give you – do you want one mantra? It comes from a Chinese gentleman who just died, Lee Kuan Yew… he said one thing over and over and over again all his life. ‘Figure out what works and do it.’ If you just go at life with that simple philosophy…you will find it works wonderfully well.”

This response really resonated with me because as humans, we often seek out the opportunity to see things from a different perspective. This is why we get a second medical opinion, agree to mediation by a third-party, or seek the advice of a tax accountant. We may have an idea about what we are doing, but deep down we know it could be done differently or even better. This understanding of human nature is the key to staying true to the financial roadmap of one’s life.

Over the past 19 years, understanding human nature, what works, and what does not has helped us at Affiance Financial as we assist our clients work toward their financial destinations. While this concept may come across in different forms, from sticking to an investment objective, to creating a safety net that plans for the unexpected, to crafting an estate plan that fulfills a legacy, human nature is always at the core of what we do.

The views represented are not meant to be construed as advice. Moreover, no client or prospective client should assume that this content serves as the receipt of, or a substitute for, personalized advice from Affiance Financial, or from any other professional.