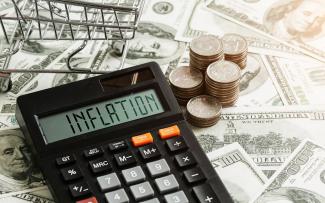 By Ryan Smith and Tanner Steele

Inflation has been the headline issue of 2022. The heightened uncertainty caused by inflation at levels not seen in nearly half a century has resulted in a rollercoaster ride across equity and bond markets. At the time of this writing, almost a quarter (7 out of 30) of the largest daily moves for the stock market this year occurred on days where either inflation data was released or the Federal Open Market Committee met and addressed the public. The Fed has raised interest rates five times so far this year, at an unprecedented pace, in response to rising inflation. Price stability ultimately falls on the Fed’s shoulders, and its officials have reiterated that they will do what it takes to accomplish their goal. Because of the impact that inflation has on consumers, the financial markets, and the never-ending news cycle, we felt that the nuances of inflation deserved a further explanation.

Over the past 15 years, the U.S. has been fortunate to have experienced mild inflation (0-2%). Ideally, countries will target mild inflation, which can stimulate spending, resulting in higher demand and productivity while boosting the economy. High inflation reduces buying power for consumers, which lowers their standard of living, especially when wage increases do not match the rate of inflation. Corporations are also impacted by high inflation, as the cost to make their products increase putting pressure on profitability. Some of the higher costs are passed off to the consumers in the form of price increases, but this damages customer relationships and can reduce sales. Additionally, a general decline in prices, called deflation, is often good for consumers, as their purchasing power increases. However, deflation typically comes due to a recession or stagnant economic growth. An example of this is Japan, which has struggled with deflation for the better part of three decades as its economy has remained flat since 1990. In that time frame average wages in Japan have only increased 3% compared to an average increase of 47% in the United States.

Understanding how inflation is measured is important, especially in today’s market, which has been heavily impacted by Fed actions in their fight for stable prices. The most common measure of inflation is the Consumer Price Index (CPI). Every month CPI measures the prices of goods and services for over 94,000 items to see how prices have changed since the prior month. Included within CPI is housing, food, gas, and vehicles, just to name a few. These items are then weighted in proportion to their share of consumer spending. The most common way CPI is reported to the media is through its headline number, which shows the percent change in prices over the last twelve months. The most recent data was released on October 13, and showed an 8.2% increase of prices from September 2021 – September 2022. Although this headline CPI number has fallen from 9.1% in June, we have not yet experienced deflation. Economists and investors also look at Core CPI data. Core CPI measures all items except food and energy. Food and energy are often more strongly impacted by volatile price movements than other items in the CPI. By excluding food and energy, you can see a smoother inflation picture as shown in the graph below. 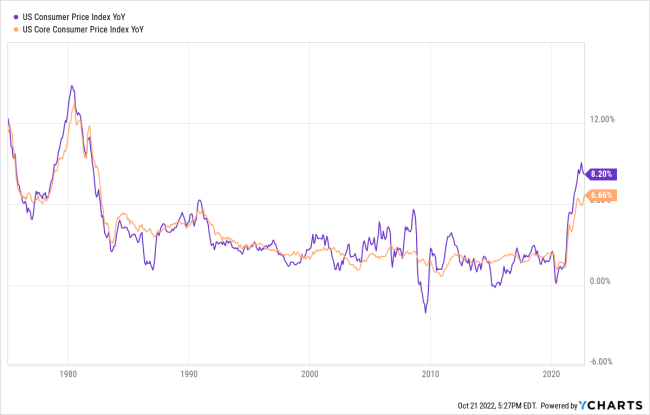 However, every consumer has individual spending habits. This year has been difficult for consumers to escape inflation, as nearly all categories have risen to some extent. Food, energy, and housing have all risen this year, which make up a majority of typical consumer spending. Below is a graph that shows the items that have experienced the largest price increases over the last year. Fuel and airline fares may be the most noticeable to consumers, as they command more of their savings. But common grocery items, like eggs or margarine, have risen by over 30%, and may have gone largely unnoticed due to the smaller price tag. Additionally, food at employee sites and schools have experienced the largest price movement over the last year, greatly impacted by a 44.5% increase in September 2022 alone.

The chart below shows the CPI items that have had the largest impact on CPI over the last year. Shelter, transportation, and fuel have had the largest weighted impact, due to the proportion a typical consumer spends on these categories. As seen above, oil is a component of CPI that has risen the second most over the course of the year, and thus has impacted consumers greatly. Conversely, shelter has not experienced as drastic a price increase, only increasing 6.6%, but because it makes up 32.5% of the total CPI calculation, it is the item with the largest weighted impact. 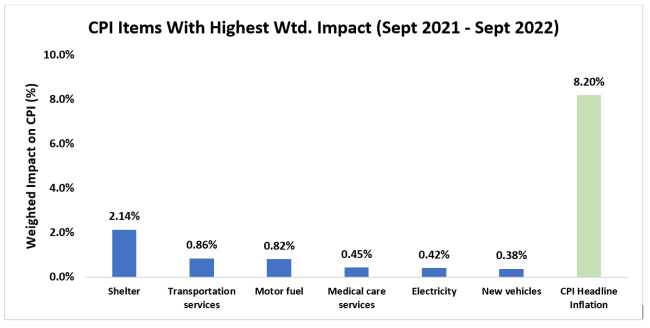 Higher prices are easily noticed at grocery stores and at the pump, but another phenomena that consumers may not have noticed is “shrinkflation.” This is when businesses choose to lower the quantity they are selling in order to keep prices the same. Shrinkflation is an effort to camouflage price increases from customers. Below are some examples: 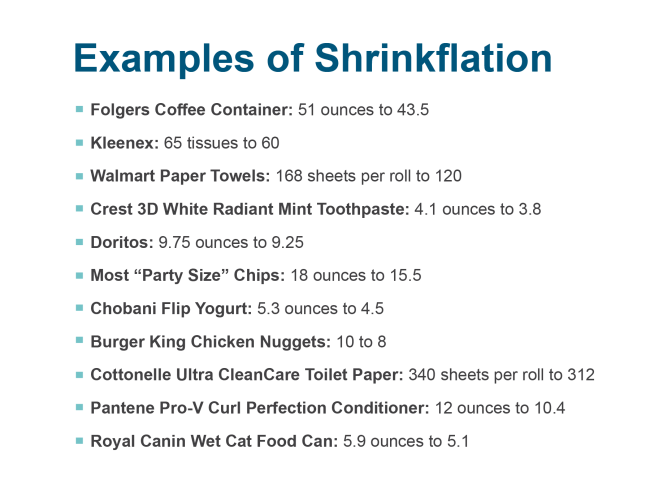 Some of these changes equate to a 20-25% price increase. Although these changes may trick consumers, they do not fool CPI, as it adjusts for quantities. So, these changes are reflected in reported inflation numbers.

Overall, it has been a challenging year for U.S. consumers, but we are optimistic that inflation will ease in time. The Fed has gone to battle with inflation before and they have not lost a fight yet. Rising interest rates will reduce demand. But this takes time for the effects to be felt by the economy. Global supply chains will also continue to ease as businesses invest in production due to rising demand. These factors will make it easier for inflation to return to the 0-2% target that we have become used to in recent years. In a theoretical world, inflation would eventually return back to target rates on its own, as supply and demand balance each other out. Unfortunately, the Fed does not have the time to wait for this to occur naturally, as political pressures force them to get inflation under control. Reigning in inflation may be painful in the short-term, but stable prices are necessary to the long-term success of the U.S. economy.

Information presented is believed to be factual and up-to-date, but should not be regarded as a complete analysis of any subjects discussed. All opinions reflect the judgment of the author as of the date of the post and are subject to change. A professional advisor should be consulted before making any investment decisions.