As we gear up for this year’s March Madness tournament and everyone starts to fill out their brackets, you’ll be hearing a lot of talk about who the “hot teams” are. Many times, the overall number one seed is the team that is coming into the tournament with the longest “hot streak,” yet since 2000, only 2 out of 17 number one overall seeds have won the tournament. While the seed ranking is based on historical performance, those who favor the number one seeded team to win the tournament essentially believe that the hot streak will continue. That belief that a hot streak will continue, or that something is more likely to happen again because it occurred in the recent past, is called recency bias. This concept is also very prevalent in the world of investing.

In 2017, the S&P 500 delivered a 21.7% total return and saw a positive return in every month. Because of this low volatility and steadily increasing environment, investors began to believe this was the new norm. This belief, or recency bias, caused investors to flood the market in 2017. But, the rally eventually came to an end. When the S&P 500 fell 2.6% during February 2018, the uninterrupted 15-month rally came to a close. Recency bias also works for the inverse.  When the market declines for a long period of time, investors are more likely to get out; due to the belief that the future will be similar to the most recent past.

Below are two additional examples of the effect of recency bias in the last 20 years:

During the Tech Bubble in 2000, many investors flooded the market after rapidly appreciating stocks convinced them to ride the wave. Investors made emotional decisions, sure that the rising market would continue to appreciate. Unfortunately, the NASDAQ Composite peaked at 5,132.52 on March 10, 2000, and fell 78% in the following 30 months — wiping out the late investors.

During the global recession of 2008-2009, many investors sold off toward the end of the recession because what had happened recently was beginning to look like the new norm. Many investors got out of the market and missed much of the market rally that has happened since. The S&P 500 may have bottomed out at 676.53 in 2009, but less than ten years later, it closed at 2,673.61 through the end of 2017. 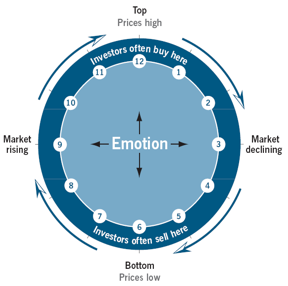 The graphic above shows recency bias in action. During a Bull market, investors tend to forget about bear markets. They believe the market will continue going up, since that’s all it has been doing recently. Emotions tell investors to buy when the market is up. The problem is that this is when stocks are most expensive. Emotions tell investors to sell when the market is down. But, that is when stocks are cheapest. Recency bias overrides the market’s collective sense of rationality because of how our brains are wired.

So, what is the key to dealing with recency bias? The answer is to maintain a long-term investment plan.  What we do at Affiance Financial, is work with clients to pick a target asset allocation that reflects your investment objectives, time horizon, and tolerance for risk. Then, we utilize a rebalancing system to ensure that we are sticking to your investment plan.

Rebalancing client portfolios helps to keep recency bias in check. For example, an average 60% stock and 40% bonds and cash asset allocation will be rebalanced based on drift (the movement of the portfolio caused by market conditions). If the market increases, and the portfolio is now at 65% stocks, we will sell 5% stocks, and buy 5% bonds. This will return the portfolio to its target asset allocation.

So, as you fill out your bracket this year, don’t let your recency bias take you out of contention to win your office pool. Take a lesson from the market: recent performance does not guarantee future results. Pick your favorite team every year, or pick your favorite mascot every year.  Just know that because something happened yesterday, doesn't mean it will happen again tomorrow.

The views represented are not meant to be construed as advice. Moreover, no client or prospective client should assume that this content serves as the receipt of, or a substitute for, personalized advice from Affiance Financial, or from any other professional.